After spending time visiting the flood-ravaged waters in Pakistan as Special Envoy for UNHCR, the UN Refugee Agency, Angelina Jolie has been back home in Los Angeles spending time with her children.

And on Saturday, the acclaimed actress and director got in some one-on-one time with 14-year-old daughter Vivienne, which included a stop to get groceries at a Gelson’s Market in the Los Feliz neighborhood of Los Angeles.

Family time: Angelina Jolie, 47, and daughter Vivienne, 14, made a stop to get groceries in the Los Feliz neighborhood of Los Angeles on Saturday 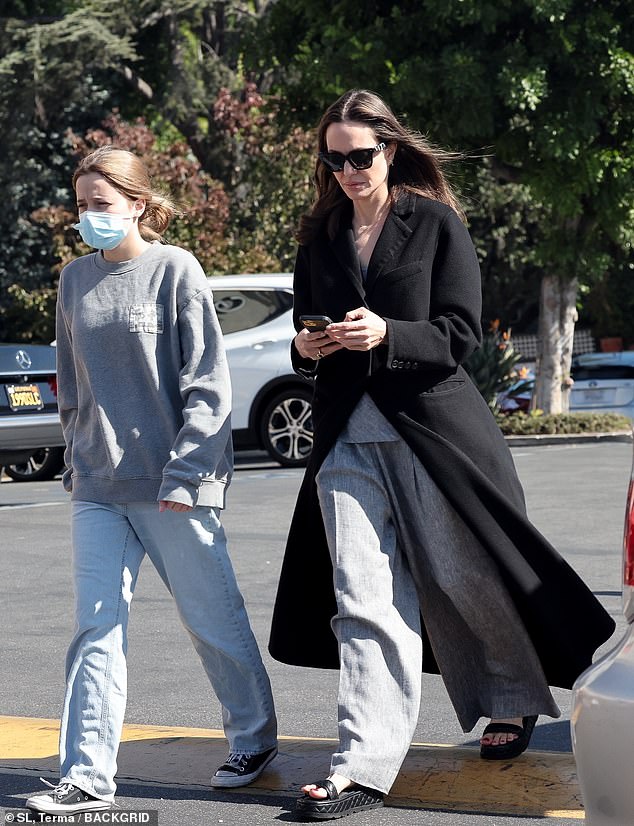 She also wore black platform sandals, dark sunglasses and had her dark brown tresses styled long and straight, well past her shoulders, with a part in the middle.

Vivienne, who has a twin brother Knox, along with four other brothers and sisters, looked like the typical teenager in bleached out jeans, a gray sweatshirt and black Converse sneakers.

She had her long light brown locks pulled back into a ponytail while wearing a mask.

Along with Knox, missing from the outing was sister Shiloh, 16; older brothers Maddox, 21; Pax, 18; and sister Zahara, 17, who’s currently a student at Spelman College in Atlanta, Georgia. 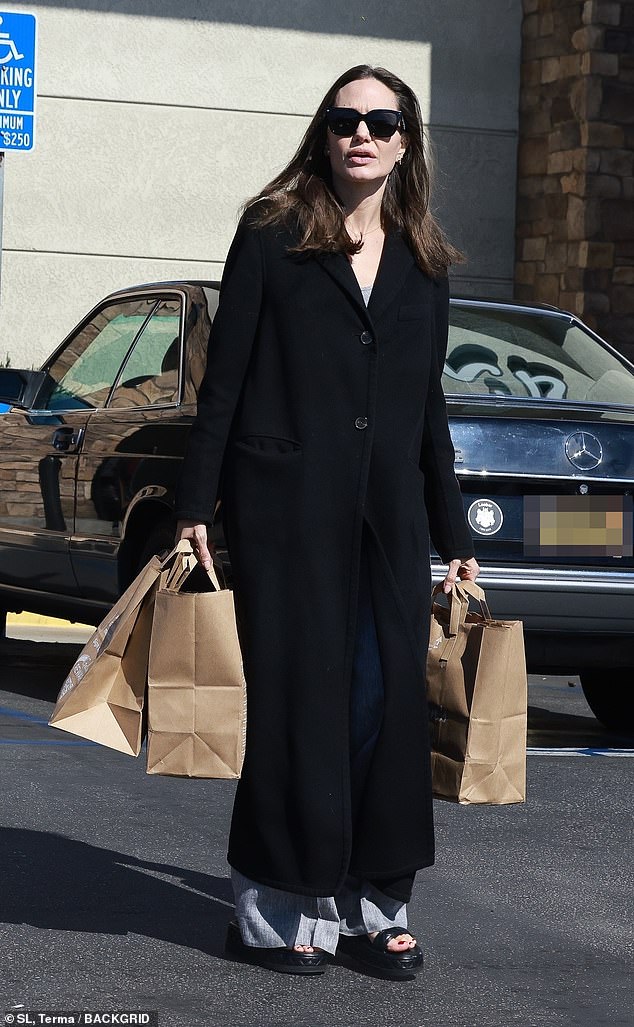 Classy: The actress and director looked classy in a black overcoat over a gray ensemble when she carried three bags of groceries out of the market and back to their parked car 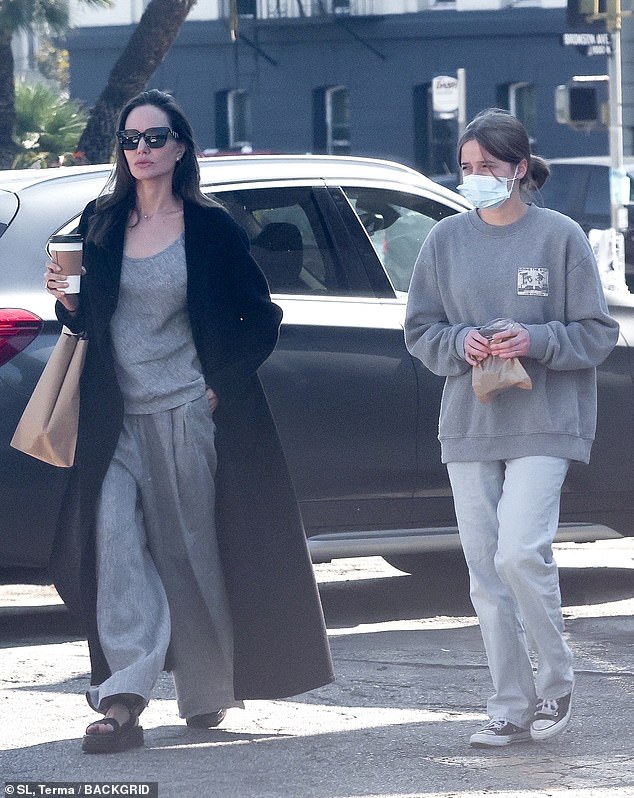 Just weeks ago, Jolie got an up-close look at the devastating floods waters in Pakistan, which included meeting some of people affected by the catastrophe.

One week later, she took to her Instagram page and shared a few photos that were taken during her time visiting disaster areas with @rescueorg and local organizations.

After sharing how ‘severe flooding  has submerged  1/3 of the country’s land’, Jolie revealed some more of the heartbreaking statistics. 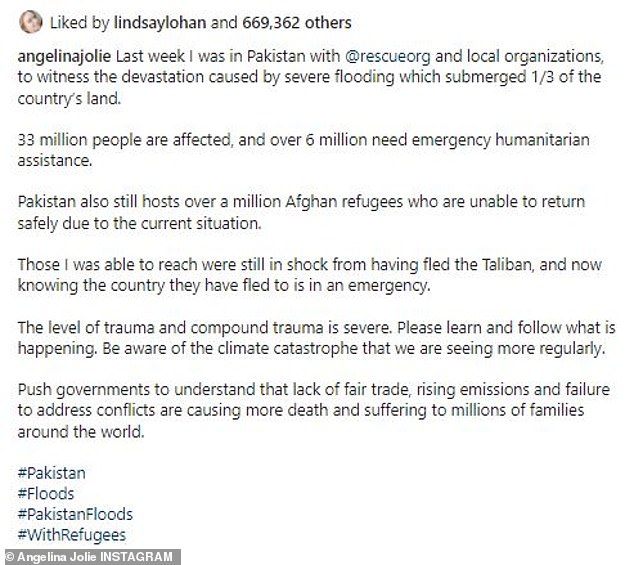 Making a difference: After visiting the flood-ravaged regions of Pakistan in September, Jolie urged her followers to be aware of the situation and to push their governments to ‘understand the lack of fair trade, rising emissions and failure to address conflicts are causing more death and suffering to millions of families around the world’

’33 million people are affected, and over 6 million need emergency humanitarian assistance.,’ she wrote, before adding, ‘Pakistan also still hosts over a million Afghan refugees who are unable to return safely due to the current situation. Those I was able to reach were still in shock from having fled the Taliban, and now knowing the country they have fled to is in an emergency.’

She went on to plead with her 13.8 million Instagram fans and followers to ‘please follow what is happening’, and urged them to ‘push governments to understand that rising emissions, failure to address conflicts and lack of fair trade are causing more death and suffering to millions of families around the world.’

After years of dedicated service as a UNHCR Goodwill Ambassador, Jolie was appointed Special Envoy in April 2012. In her expanded role, she was given authority to represent Guterres and UNHCR at the diplomatic level, with a focus on major refugee crises. 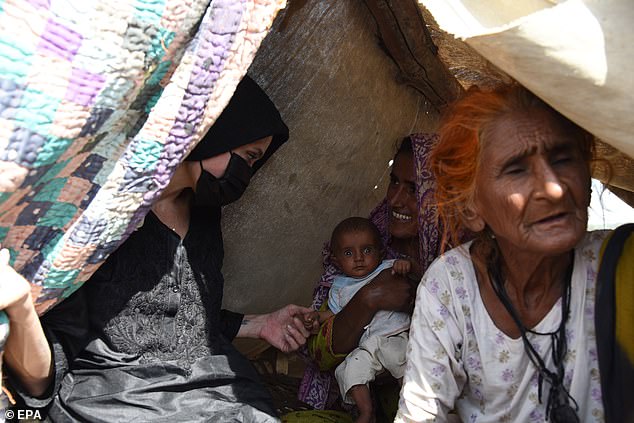 Assessing disaster: As Special Envoy for UNHCR, the UN Refugee Agency, Jolie met with people affected by the floods in Dadu, Sindh province, Pakistan on September 20 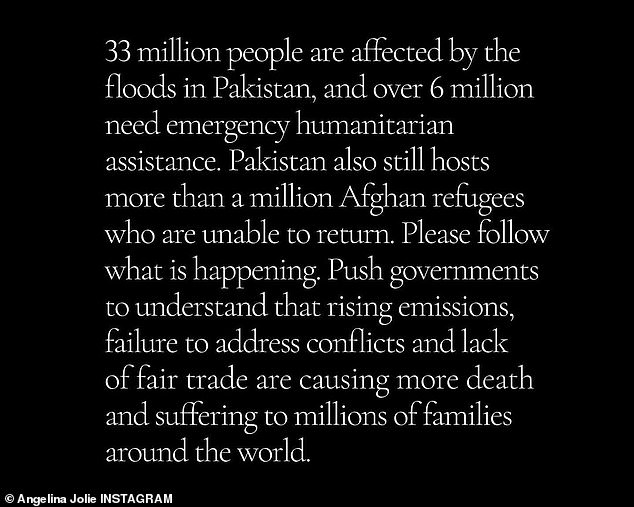 Harrowing statistics: Jolie maintains 33. million people are affected by the floods in Pakistan, and over 6 million need emergency humanitarian assistance 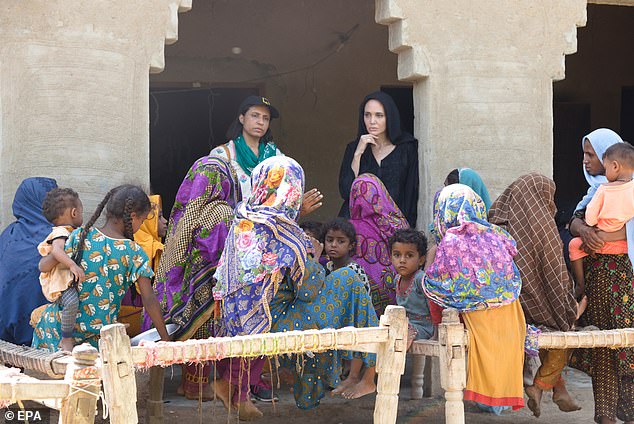 Heartbreaking: The Oscar-winning actress also meet with children who are out of their homes due to the disaster in Pakistan

‘World leaders must be held to their promises’: Angelina Jolie demands deforestation be stopped adding she has been protecting trees in Cambodia for 20 years

Gwen Stefani shares she was up for the role Angelina Jolie landed opposite Brad Pitt in the 2005 film Mr And Mrs Smith: ‘She beat me!’